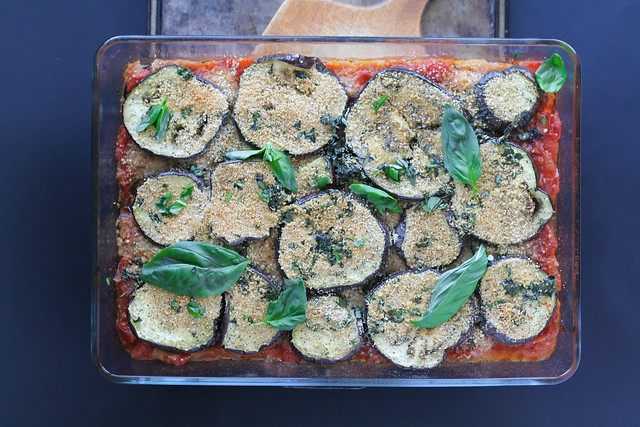 I don’t know why eggplant sometimes gets hated on. I absolutely love the stuff when it’s prepared nicely. Of course, I’ve had breaded eggplant parmesan that I absolutely hated, and I don’t like it when its cold and sloppy inside of a vegetable wrap. But this eggplant is another story entirely. Mark  Bittman called it “eggplant un-parmesan,” but because it’s vegan, doesn’t even call for cheese, and is totally different from eggplant parm, I decided to call it just what it is: roasted eggplant with tomato basil sauce. It is simple, and awesome, and the wonderful roasted flavor of the eggplants and tomato and basil just stand on their own. 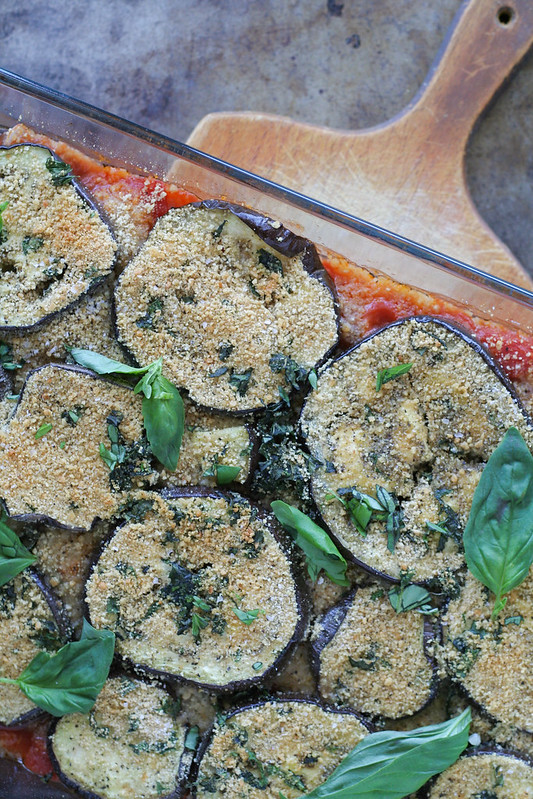 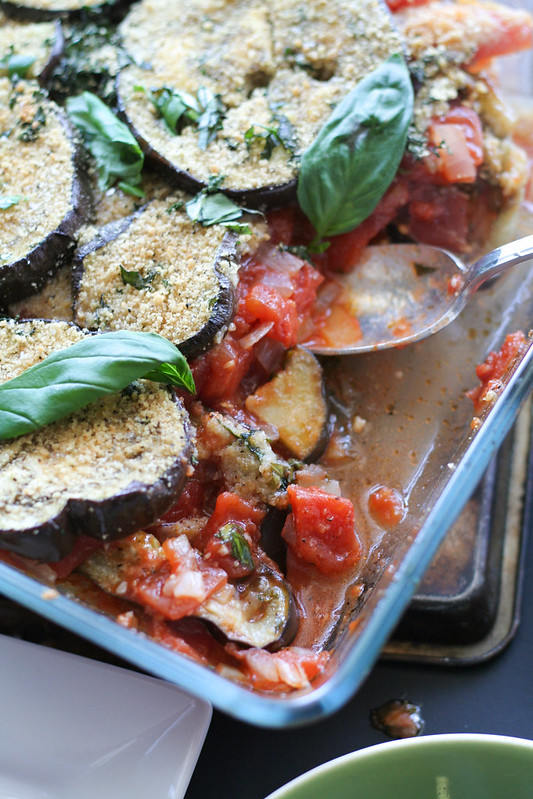 Of course, if you like parmesan, I say go ahead and throw some in with the breadcrumbs on top of this dish – that could only be delicious. But if you want to be vegan or see how eggplant can be good without cheese, try it without. The top pieces of eggplant crisp up with the breadcrumbs, while the lower layers get tucked into the long-simmered tomato basil sauce and are super flavorful. It makes a great side dish for any meat, or makes a great vegan dish over rice, quinoa or any other grain. I imagine it would be great with some red chili flakes as well to spice it up… the possibilities are many! 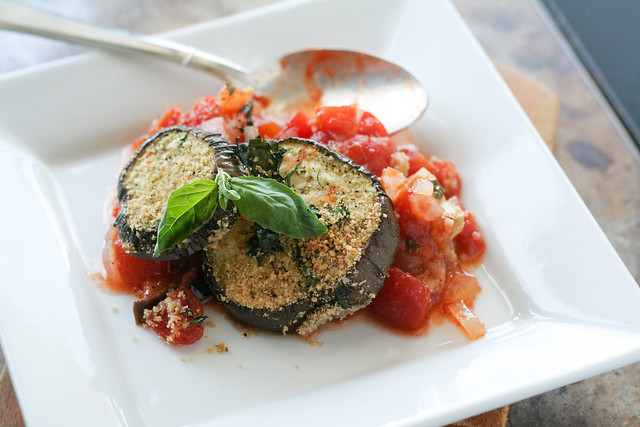 Heat the oven to 450°F and position two racks so that there is at least 4 inches between them. Cut the eggplant crosswise into ½-inch-thick slices and arrange them on two rimmed baking sheets. Use 2 tablespoons of the oil to brush the top of each eggplant slice and sprinkle them with ½ teaspoon salt and some pepper. Roast the eggplant until the slices brown on the bottom and sides, 10 to 15 minutes; turn and cook the other side until they’re crisp in places and golden, another 5 to 10 minutes. (Note: when I made this, my eggplant completely stuck to the bottom of the pan in some places – that is fine, those eggplants can just be left unturned). When they finish cooking, remove them from the oven and lower the heat to 400ºF.

Cover the bottom of a 9 by 13-inch baking dish with about ½ inch of the tomato sauce. Nestle a layer of eggplant into the sauce and top with some of the basil. Cover with a thin layer of tomato sauce and repeat until all the eggplant is used up (I had just 2 layers); reserve some of the basil for serving. Sprinkle with the breadcrumbs, the remaining ½ teaspoon salt, and lots of pepper, and drizzle with the remaining tablespoon of oil. Sprinkle with parmesan cheese if desired. Bake until the breadcrumbs are golden and the sauce has thickened, 15 to 20 minutes; let rest for 10 minutes before serving. Serve hot, warm, or at room temperature, garnished with the remaining basil; pass any remaining sauce at the table (or refrigerate or freeze it for another use).