Skip to Content
Home Parenting If You Were Me and Lived in … by Carole P. Roman Review

We’ve gathered various books by Carole P. Roman throughout the years. She has various series, and we particularly like her cultural and historical works. We were recently given the opportunity to review additional Carole P. Roman books and collections. We selected seven titles from her cultural series: If You Were Me, Lived in…

This series is intended to educate children about places and cultures all around the world through the perspective of a kid. They walk the reader through their home country, teaching about their everyday life. What would your name be if you were a girl or boy in this country? What would you call your mom and dad, or your grandma and grandpa in the native language? What would be your favorite games, toys or sports? What foods are loved by your family? These are the types of cultural facts that are addressed. Essentially, the narrators are sharing what a childhood in this country is like, through the things that are most important to children.

When requesting the specific titles to review, I tried to get variety so we could travel across different continents, experience different languages, and really see the differences in the cultures. I’m always looking for easy ways to add to our geography studies, and add cultural appreciation, and these books are a fun resource. Although the books are written for ages 4-8 years old, there is much flexibility with this age range. I read them to my older three kids, who are 5, 8, and 11, and they all appreciated them on a different level. 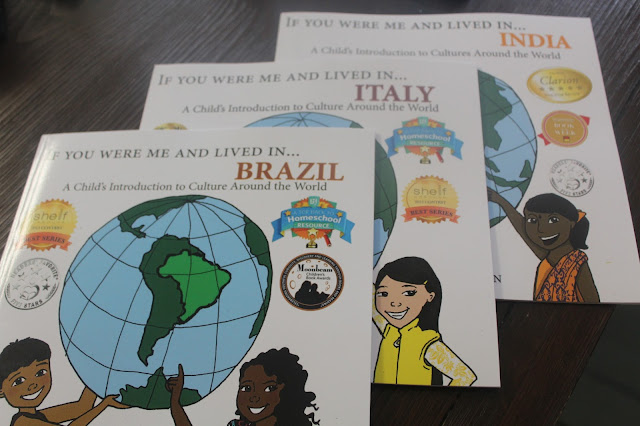 I chose this book because last year in co-op, one of the facilitators was from Brazil and taught a Portuguese class for the kids.  I knew it would be a good way to make an interesting real-life connection.  We learned why Portuguese is the national language of Brazil, and as we looked at Brazil on the map in the book, one of the kids immediately went to our wall map to find it.  I love it when books encourage this kind of exploration.  We also learned that Brazil produces the most coffee in the world, and we noticed that the page numbers have little coffee mugs next to them!  The kids made sure to tell dad that night, as he is our resident coffee drinker.

We requested this book because I thought it would be fun to expose the kids to some Italian.  I love that each book uses many common words in the country’s native language, and includes a pronunciation guide in the back.  My older elementary kids really enjoy this part of each book, but have actually requested that Italian be our foreign language of choice!  This book in particular gave us a lot of interesting facts about Rome, due to its influence on western civilization, and reminds us that it is the only city in the world that has another country inside of it, referring to The Catholic Church and Vatican City.  The kids noticed the page numbers were marked with the Leaning Tower of Pisa and questioned why it wasn’t mentioned in the book.  I know every landmark can’t be included, but I found that an odd choice.  There are some fun facts about the Colosseum though!

Carole P. Roman depicts Germany through the perspective of two children and their family, offering a little history, views of iconic landmarks, and a taste of daily life. She portrays the feeling of a new Germany that is considerably different from the old one by featuring elderly characters such as the children’s grandparents. Carole excels in bringing a country’s culture down to a kid-friendly level, as seen by her reference of Neuschwanstein Castle’s design as inspiration for Disneyland’s Sleeping Beauty Castle, or her highlighting of Hamburg’s Miniatur Wunderland, the world’s biggest model railway.

If You Were Me and Lived in . . . Ancient Greece

Every few years, we touch on historical empires in our research, but the Ancient Mali Empire and the Ancient Mayan Empire have never been mentioned for our major study. Various books are great to have on hand so that my children may get a taste of these cultures and histories without having to do an in-depth unit study. This is why I like Carole P. Roman’s works so much. They fit in with our study plans and only make the time more richer, more full with educational opportunities, and my children like it all. There is so much to learn from these books, and I believe that every school should have a collection of Carole P. Roman diverse series for educational purposes!

The book opens with a photograph of a typical small English town today; flip the page to see what a small English town looked like in 1072, over 950 years ago. These two photographs demonstrated the significant disparities between the two time eras. You will learn about fiefdoms, feudal holdings and feudalism, deamesnes and serfs as you read the book. You’ll also learn about castles and moats, popular children’s names at the period, marriage, clothing, art, food, professions, class system, health, currency, sport and games, entertainment, religion, and education.

At the conclusion of the book, there are several chapters about renowned persons from the Middle Ages, such as William the Conqueror and Joan of Arc, as well as some less well-known figures, such as Clovis and Hildegard of Bingen. Each of them has a brief biographical paragraph on who they were.

If You Were Me and Lived in . . . Viking Europe

You may be Ulf (“wolf”), a kid who hunted whales and seals with your father. Throwing spears, firing a bow and arrow, and juggling with knives were undoubtedly among your favorite pastimes. Your house would have resembled a ship, with circular sides and a fire pit in the middle.

The final book we chose focused on India.  One of my goals for my children is to not just teach them geography and cultures, but to curate a sense of appreciation, sensitivity and wonder about the rest of the world.  This book focuses on a region we haven’t really studied yet, so it offered opportunity to expand our horizons a bit.  My husband has also been wanting to try some Indian recipes he saw online, and though we haven’t had another Foreign Cuisine night yet, I definitely want to include some of the foods that we read about in this book.  The kids found another connection with the rickshaw cab in this book, as we had read a literature book earlier this year featuring rickshaws.  They also really liked reading about the Taj Mahal, since they are always interested in famous architectural landmarks.

As the books are geared towards younger children, they are simply written and focus on lighter topics, and avoid things like religion or politics.  They are slightly formulaic, in that we know all of the major topics that are going to be covered.  I usually read the pages before showing the pictures, but my older kids always know when the favorite toy of the little sister is going to be a doll, and when they are headed to school at the end of the book.  That being said, they are still informative for the older crowd who hasn’t had much foreign language or world cultures exposure.  The books can be a  great starting point for a geography study – we like to read one during the week, look it up on the map, and maybe discuss a few topics out of them, and practice saying the different words in the target language.  The kids also pointed out how the pictures varied, as some pages have only illustrations, and others have a realistic photographic background with illustrated overlays.  It was an interesting touch. 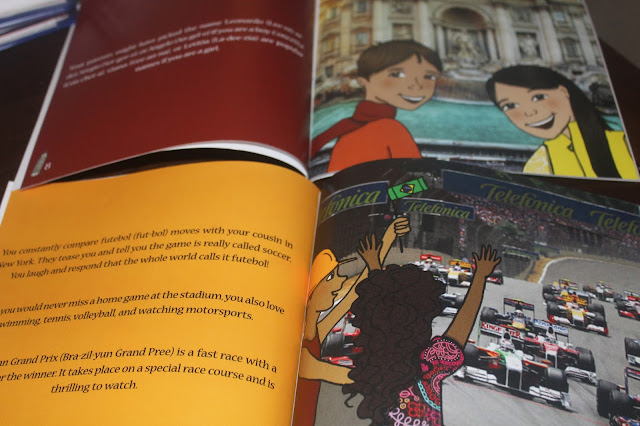 Looking up photographs online is a great way to dig a little deeper, and we usually did this too. You can also cook recipes mentioned in the book, or have them research the holidays or other cultural aspects mentioned in the book, or see what rabbit trails it takes you on. I’ve taken one of the other books in this series to my 2nd grade literature co-op class (South Korea, for the Olympics earlier this year) and used it as part of a lesson on informational texts. There are just so many possibilities with these books, and the kids have actually asked me to get our others back out to read again!