My weekend was spent (much to my disgust) role playing Frozen with First Born. I’m trying to persuade myself that it’s just because I’m truly interested in the interior décor of Elsa’s ice palace and her beautiful Real Housewives style makeover as she goes all ice bitch that I’m starting to like the movie (complete with sexy strut and possible boob job). It just hits my love of reality TV buttons.

First Born has taken to dressing up in dresses. Specifically the blue one. Just like Elsa. He looks very pretty in it, and the instructs me to role-play Frozen Scenes while he goes about his usual business – ramming cars off the table, scoffing kinder bars and torturing his brother. I admire his resolve to just wear a dress and get on with normal shit, like a true cross dresser.

However Bobcat (el bambino, second born), has been feeling crappy after his jabs, which means I’m now sporting a beard of generic Tylenol equivalent (alongside my normal beard after tweezing neglect since Bobcat arrived) after being peppered with the baby spit laden sticky stuff.

So, if your kid is poorly and if you have kids like me, you have to outsmart the little unreasonable buggers into taking something to make them feel better. And then you inevitably then catch whatever illness they had a week afterwards, and come down all man-flu and ridden with guilt that maybe you should of given them a bit of paracetamol because actually it is a bit shit this feeling ill malarkey, then, also like me, you’re going to have to dose them up and face the toddler/baby Tylenol-in-face-fest, that is giving medication. Woah, that was a long sentence.

Now if you have little angel delights who just open wide and take a spoonful of meds, and don’t claw their way over you to avoid a Doctor’s stethoscope all sweaty and snotty, then good for you Glen Coco. But, for the rest if us, with sweaty flailing children doing the Twister dance to get then to take just drip of paracetamol without losing the vision in one eye from a that plastic double ended torpedo of spoon (quick random question: who else has a little cutlery tray section devoted to those little white spoons?) here are some tricks I’ve picked up. 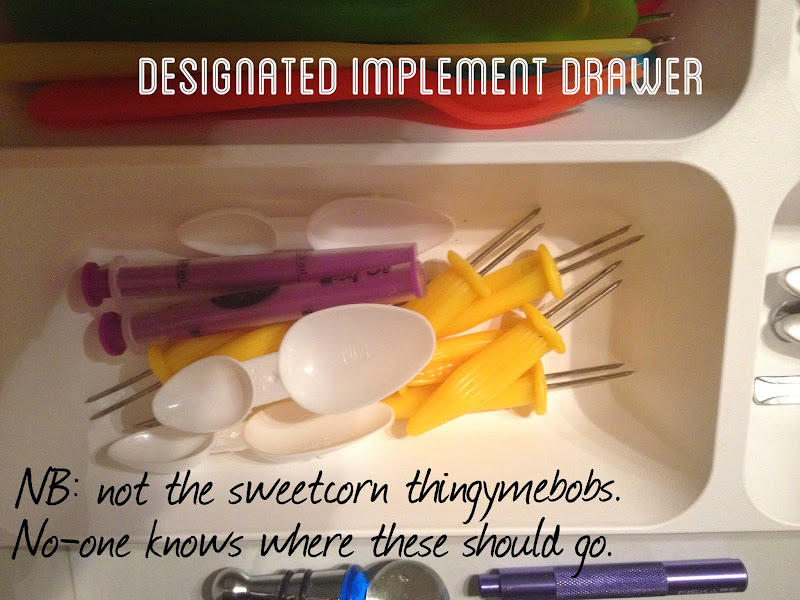 *Sarcasm Disclaimer – this article may be smothered in some dry wit, try not to slip on it.
**Medical Disclaimer – If your child is sick and you’re worried about them – stop fannying about on the interwebs and go see an actual medical professional.

Firstly, Super, most important tip: Always read your medication label to make sure the dose is correct and that you’re not mixing it with something you shouldn’t. I’m pretty sure yogurt is inert enough (see tips below) to mix with most things but if unsure ask one of the munch bunch, failing that, as you inevitably will (they are fictional), your local friendly Pharmacist or Doc.

OK kids, its bad to lie, unless its coming from your parents and they are trying to conceal foul tasting Flucloxacillin or other such very useful but rank tasting medicines. This is where you crack out your Mary Poppins side and think ‘spoonful of Sugar’. But obviously don’t actually give them a spoonful of sugar before I get attacked by Katie Hopkins for making the US fat or dissolving children’s teeth.

Every parent knows this is the child equivalent of wine, they can’t get enough of he stuff and like to kick back at the end of a hard day fighting over shit at preschool with a pot of yoggie yog yogs. You can either go classic and just pop a layer of yogurt over the spoon or mix it in a pot.

I met a fellow doctomum who squeezes paracetamol into a munch bunch squashum to keep her toddlers fever down – genius! Though her 2 year old was always a bit confused why he would receive such a delicious sugary delight in the middle of the night.

And for the bambinos – If you haven’t yet weaned, then I’ve found popping it in their milk and mixing well can help. Just be aware that that would be your only chance to get the med into them and if they don’t finish the milk, don’t be tempted to guestimate a top up dose. You’ll just have to leave it until the next time you can give a dose. It probably isn’t optimal dosing either as some will get stuck to the sides of the bottle but its better than nothing if they won’t take it off the spoon.

If you have a fly kicking, clamp mouth shut type child, then this tried and tested holding technique is for you. This technique never hurts the child and is the one most docs and nurses use to examine throats/ears/give meds. Do not feel guilty about doing it, you are doing it to help your child over the discomfort of illness (and your subsequent discomfort of non sleeping, clingy whinging child, so not totally altruistic).

It needs two people (there is always the one person technique that we all do, which uses your pre-kids yoga positions and gritted teeth, but this is not recommended, obviously, as since you’ve had kids you cannot control your pelvic floor in these positions and you do not want pee and sticky pink Tylenol all over the sofa).

So, person 1 (the restrainer) sits down and has the kid in their lap with their back towards them. They then hold the child’s legs between theirs and cross one arm over the child arms firmly, and one arm across their forehead, holding their head close to your chest, then use your third hand to uncork the wine for later. No, actually use that third hand to instruct your medicine giver (person 2) to tip the meds in their mouth whilst you gently tilt their head back. 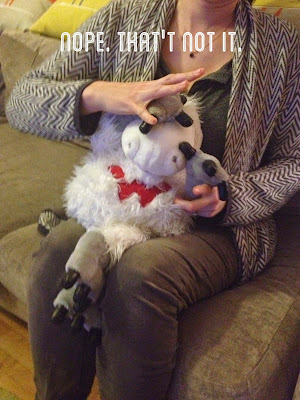 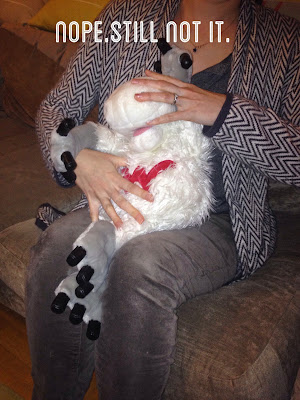 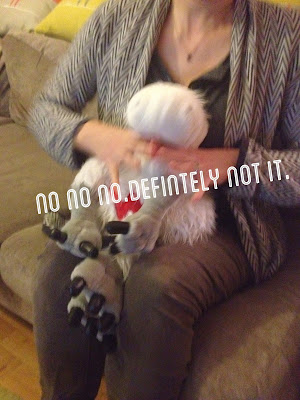 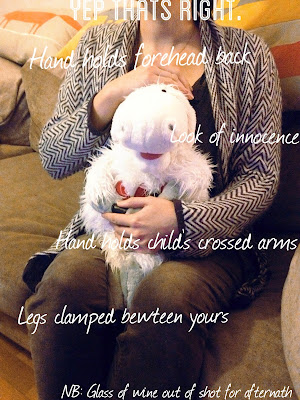 Do it quickly, swiftly and with confidence. Practice on a teddy first (and look a bit of a knob), they key is in the confidence. All children smell fear and if given the chance they can wiggle their way out of this in a head jerking body spasm dance, and you will be left with a drool covered hand and bruised knackers if you assigned Daddy to do the holding.

Now once your child has reached the age of reasoning (also know as manipulation), you may be able to employ a little truth stretching. In our house paracetamol, vitamins, ibuprofen, any medicine is called ‘sweeties on spoon’. This is because my toddlers main motivation is sugar. I am aware this will inevitably backfire on me. Other more sensible lies could include calling it superhero juice, Thomas fuel etc.

NB: Always keep your med stash out of reach of kids in a safe locked high up barricaded place. Think the Forte Knocks of medicine cabinets. Tylenol et al is like crack to a toddler, they will stop at nothing to neck the whole bottle and those child proof caps are not always child proof (especially after you’ve been distracted not to tighten it properly by a toddler mounting you back in a bid for you to put beebies on and to stop dicking about on your iPhone). In essence no one wants a trip to A&E after an accidental overdose, or the blood tests or the IVs or the liver damage. Stay safe kids.

Squirty tools to be precise. Syringes are great as you can measure precisely too, but if you don’t have these then use that helpful syringe from Tylenol…then buy the cheap paracetamol from then on (see next trick).

I find its best to squirt a little at a time into the inside of the cheek (don’t squirt it into the back of their throat or they will gag, stupid. I say stupid, as I have done it in haste and it was stupid).

Trick #5: Be a cheapskate but not too cheap.

This is mainly a money saver against the big Tylenol giant et al (soz Tylenol, I love your squirty thingy, but you are ridiculously expensive and pink…not one wants pink sticky spat out drool on them, that crap stains). And I don’t like the very clever advertising idea planted into the vulnerable sleep deprived parental that Tylenol is not just paracetamol, its like the mecca of paracetamols, the god of analgesics.

It’s not, it is just paracetamol, OK it’s pink paracetamol. But in med boffin terms, its mechanism of action is just the same as any other generic cheapo paracetamol.

Read also: A Parent’s Step By Step Guide To Getting Through The Squits

Basically buy generic paracetamol – supermarkets or savers tend to do it at around $2.50/bottle. The taste of most of them is still the same even for the most picky kid and I think Boots even to a pink one, if the pink color is a sticking point for your little one. Though I got some of the Galpharm brand ibuprofen sprayed in my face once and that tasted like earwax, so don’t go too cheap. And always buy from a reputable retailer, I don’t want to be seeing y’all on a Knock Off America special on fake meds.

NB: Feeling hypocritical for using Tylenols name all over the shot now. Its just the most recognizable form of paracetamol to most people and well, I’m just too lazy to keep typing paracetamol.

This is a tip I picked up from a nurse I worked with a few years back and is a trick to get them to gulp best in babies/small toddlers. After you’ve given them the med, just blow in their face, gently, like a little puff of air. Initially this didn’t work with my son, but did when he was having a teething hissy screaming crying fit about taking some paracetamol and a little puff of air in the face seems to stun them slightly, then they take a gulp – et voila, medication swallowed.

So use this when they are crying, it seems to work best then. Evidently kids must have a similar physiology to cats, as I’ve also used this on our cat, Big Suze. worked a treat.

I'm Elena, mom of two kids. My vague aim for this blog is to bring my take on medical parent life or just normal life with the odd survival tip thrown in and useful stuff for parents. And also add a hint of humor, if I'm in the right mood.