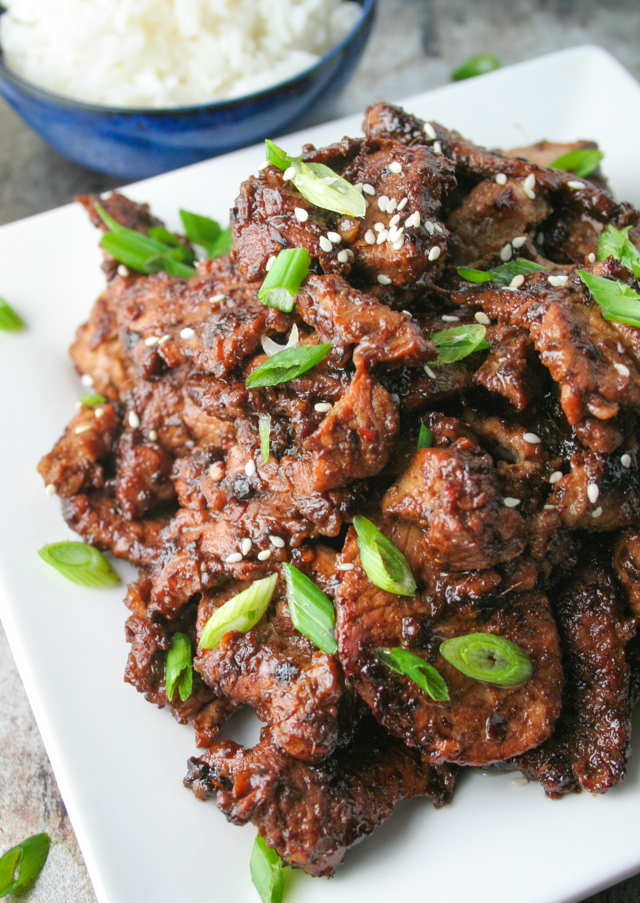 There is a small & humble but consistently delicious Korean restaurant that Dan and I used to frequent when we lived in Bethesda, where the bulgogi, dolsot bibimbap, japchae were always waiting & the waiters got to know us. We’d often go after stopping at the nearby comic book shop and one waiter would ask about what books we got and chat about those comic-related things that I know nothing about (superheroes, presumably). He always made sure we had enough hot & spicy gochujang sauce to go around. We’re not nearby that little restaurant anymore, but we are close to an Asian market (and some other Korean restaurants), which almost makes up for it.

The good news is you don’t even need to have an Asian market to make this homemade bulgogi! I was amazed at how flavorful it turned out, and how reminiscent of “the real thing” it actually is. If you had asked me a couple months ago, I would have said I was intimidated by homemade bulgogi, but this stuff is so, so good and not hard at all. It’s all about that marinade – I left mine in for at least 8 hours. Then you just pan-fry or grill it up, and it is exactly what you want over some good steamed white rice, or in some bibimbap if you wanna get fancy.

You should definitely try to make some of this – it’s easy, it’s great with beef, pork or chicken (I used pork) and after a good marinating session in the fridge it’s ready to whip up on any weeknight. 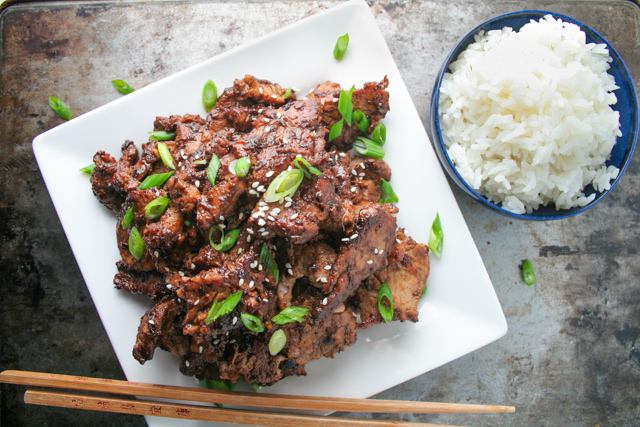 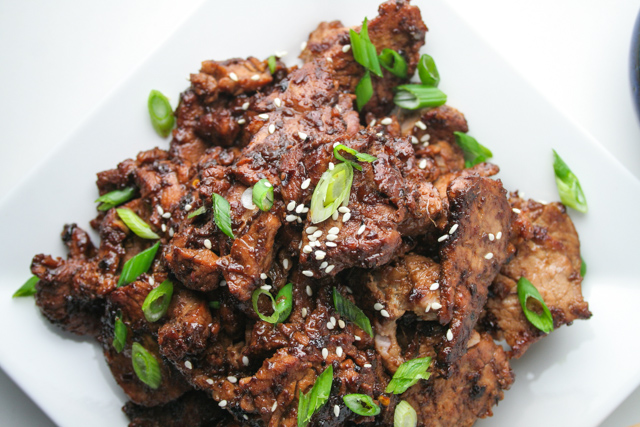 Slice the meat into very thin strips, and add then to the marinade, making sure to mix it all together so each piece of meat gets well-coated. Allow to sit in the marinade for up to 30 minutes at room temp, or chill in the fridge for up to 8 hours.

In a large skillet over medium-high heat, heat up a tablespoon of vegetable oil until it shimmers. Remove about half of the meat from the marinade (let any excess marinade drip away) and spread into a single layer in the pan. Let it cook without moving it until it gets nice and brown, about 1-2 minutes. Then you can start tossing the meat and continue to cook it, stirring occassionally, until it is fully cooked through. It should take at least 3 minutes total, maybe more if you cut your meat a bit thicker. Transfer to a plate when fully cooked, and then cook up the second batch of the meat the same way.

Serve topped with scallions and sesame seeds if desired. It is great with white rice and served with any other kinds of veggies or kimchi if you’d like.