Although the adult setting about doing the task with the miniature idiot is also pretty much a big idiot for even thinking that this is going to go smoothly.

Here’s a little of my crafting history…

Before Christmas I decided I was going to make Christmas gifts – cookies, decorations, chocolates, all in decorated cute packaging. Obviously I was delusional and abandoned that idea at conception – with a newborn and a toddler I was lucky enough to be able to make a cup of tea. Hence vouchers were purchased as Christmas gifts (like money, only shitter).

Last week I thought it would be a ‘lovely’ idea to make some hand impressions with Bobcat. Its was half term – this is what you do in half term, right? 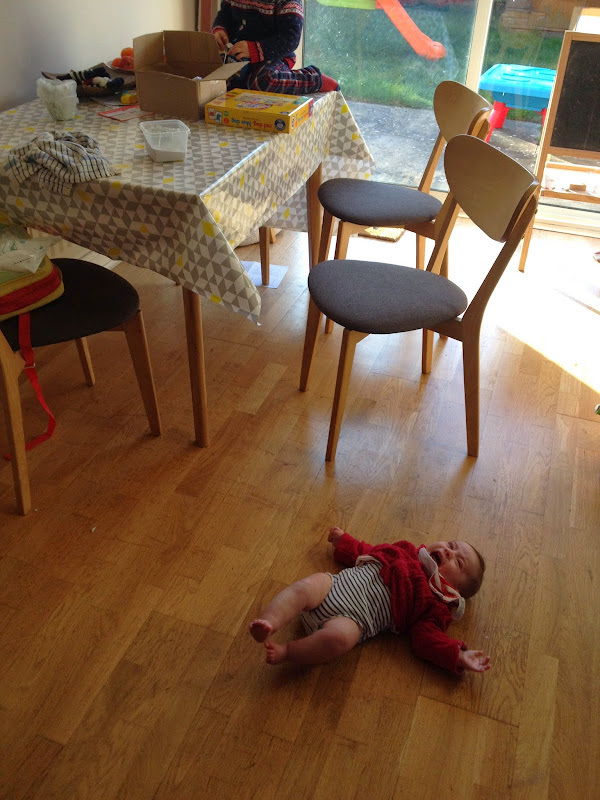 Yep, that’s how it went down.

(NB: The screaming baby covered in dental mould stuff and subsequent rush to find baby wipes distracted me from the toddler on table. I don’t normally leave him on the table. Or a baby on the floor, semi-clothed. Well, only on Tuesdays)

This craft idea was born out of guilt as Bobcat is the much neglected second born baby. Firstborn had already had an artsy cute bobble hatted overpriced photo shoot by this time, foot printed thank you cards sent out to relatives and his entire life chronicled on my iPhone memory. Bobcat is lucky if I remember to take him on the preschool run in the mornings.

So, I had one of those moments of lunacy where the realms of reality go out the window (the screams, the mess, the shit-bollocks swearing) and in comes skipping, lolling in the meadows type calm fantasy of crafting.

You see, before kids I had visions of how we would share a joint love of creative pursuits – in these dreams we would sew a quilt together, finger paint neatly, excitedly borrow new craft books from the library (whilst doing all of this we would look into others eyes adoringly) – but since actually having kids, they seem to just want to destroy things, not create. For example, this is how painting goes down in our house: 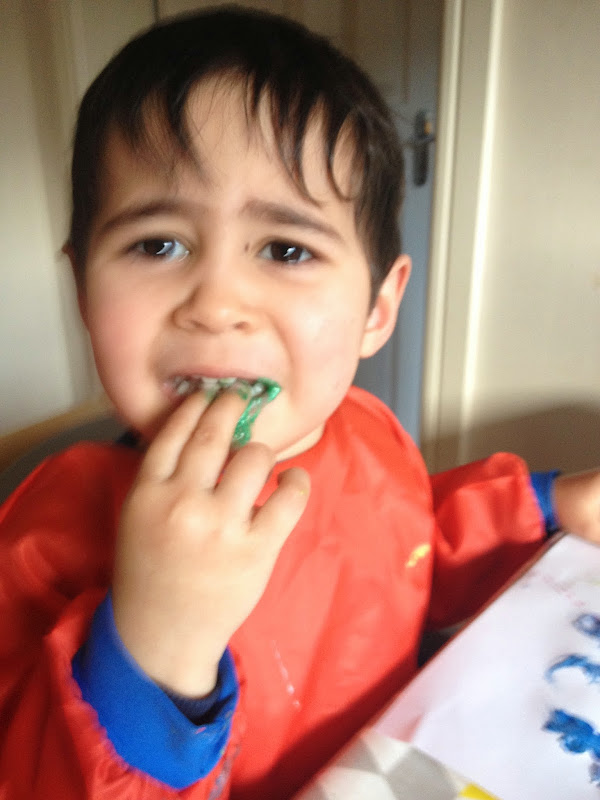 Its OK, apparently lurid green glitter paint is ‘non-toxic’, but he’ll be shitting sparkle for weeks.Now I am in total awe ( translates as: how the *** does she do it?) of the mums who set up and do these amazing creative crafts with kids and Pinterest it all. But:

Read also: How Your Children Perform Stealth Medical Tests On You

1) They prepare the crafts in nap time.

These people are bloody saints. I’m napping in nap time or in my most productive state, catching up on my mountain of sky plused reality TV. If my toddler wakes up early, I try to trick him its night time by wondering in with my eyes half shut, stumbling into things and declaring its not time for breakfast yet (it’s 3pm in the afternoon).

2&3) Patience and perfection is a mirage created by the mysticism of Instagram/Pintrest (putting a filter on the shit that goes down and editing out reality).

4) Play dough is actually quite easy to make and cheap

You should try making that instead of pretending sleeping for 2 hours every afternoon. Shame, because I’m like a crack addict for that nap (literally go into cold sweat and get the runs on the thought of losing it).

Then she said, you need to stop calling Pintrest, Pin-interest, you sound old.

So here follows what actually goes down when you craft with kids. Illustrated by the recent hand impression pursuit with a twonkler (twonk + toddler: New definition of toddler) and screamy baby:

Read also: How to Avoid a Gobfull of Tylenol in the Face

How to make Hand Impressions #keepingcraftingreal

Go to eBay, peruse selections of hand impression kits. Take roughly a week to do this as you have to fight twonkler off iPhone/laptop and you get easily distracted by twitter/Facebook and wine.
In the end choose cheapest and the one with the prettiest listing. Oh look this one says its ‘easy to do’ – definitely pick that one.

Receive kit. Kit states ‘Hand impressions can be quite difficult to do with children’. Swear at kit but then feel like superior crafting genius as that statement only refers to mums without artistic talent, unlike yourself.

Leave kit languishing for a couple of weeks. Forget where kit is. Relocate it when you are looking for the red car. Find blue car, not red car. Also find 3 bouncy balls, McDonalds toy, and 3 French fries. Consider eating French fries, it’s been a long day.

Read instructions (whilst in the sanctity of loo). Think this is easy, doesn’t even need prep time.

Regret decision to leave room. Regret decision not to prep. Regret napping in naptime.
Twonkler is down from the table and mounting baby with giant ELC inflatable bouncing bunny. Remove baby. Deflate bunny. Make mental note to scowl at person who gifted the giant bunny of doom.

Reseat twonkler. Affix baby to sling.
Now to actually craft. Mix packet of minty dental moulding stuff with stated amount of water. Take note from instructions that if it sets too quickly more water will be needed. Stick toddlers hand in.

Perfect consistency. Twonkler screams at strange blue gunk around hand. Refute comments from twonkler that this is ouchy/too cold/to stop now. Continously repeat ‘just one more second, its OK, do this for mummy, keep still!!!’
Refer back to instructions. Realise they have been relocated to recycling bin by helpful twonkler.

Repeat with baby but with less talking back and more screaming.

Take a Step back, Take a Break. Take a picture of the carnage. Send to husband. Send for help. Stick on ‘Beebies.

Mix up plaster, pour in moulds, shake off kids from legs/arms/hair. Leave for 5 hours. Clean for 5 hours. Consider early glass of wine. Remember its only 2pm. Chill it for later. 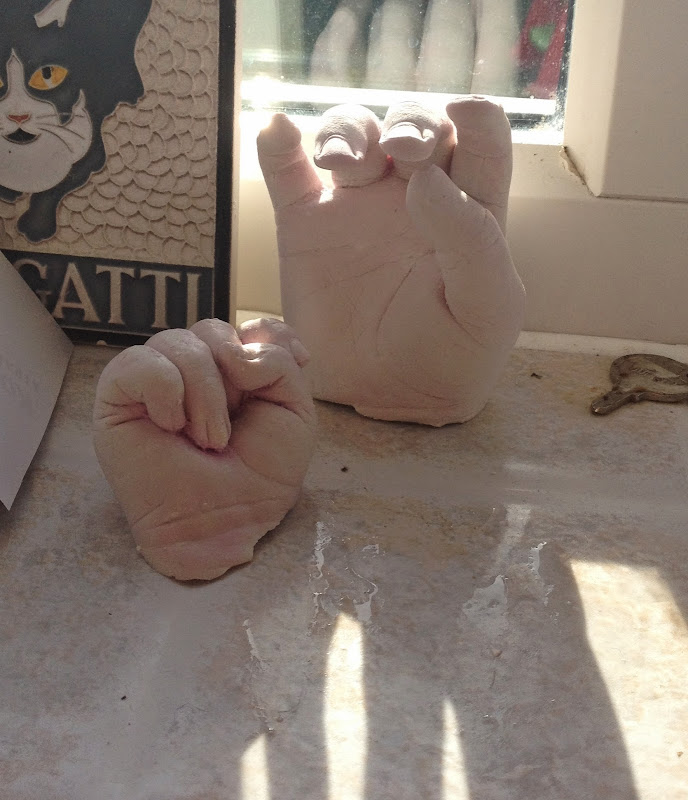 Go with latter.I suppose it wasn’t all that bad, we all shared a mutually shite experience but made good memories in the process. Crafting with kids is not all pin-interest and light.
Kudos to the crafting mums out there – keep on crafting. I’m off to indulge in naptime before its dropped. Keep crafting real folks. Sometimes its a lot of effort for the outcome. Sometimes you make something special.

Here are some more of our crafting fails:

I'm Elena, mom of two kids. My vague aim for this blog is to bring my take on medical parent life or just normal life with the odd survival tip thrown in and useful stuff for parents. And also add a hint of humor, if I'm in the right mood.