. We did come in second place which, even though they should of had a second and third place in my opinion, was pretty cool. You can see that

We had a fun time and met alot of nice people. It was fun being recognized on the street and making my dream come true of being featured on a

Even though we didn’t win the grand prize, I don’t regret all the hard work we put in and it will be something for Emily to treasure and tell her kids about some day. 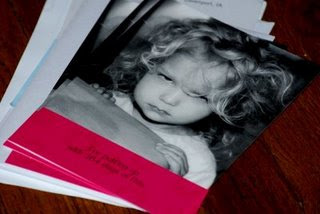 With that, I have to tell you that Emily did take it hard. Every day for a month, she had been excited about possibility of winning the prize and would point out what she was going to get with her winnings. When she was told that she didn’t win and would not be able to buy the new barbie house she wanted, she threw herself on the couch and put her hand up to her forehead and gasped, “Now my barbies will have to live in their car!”

I’m not letting you down this week- I’ve made sure that I had an interview for Words With A Blogger Wednesday no matter what! I kidnapped a blogger and held him in my closet all week to make sure. I’m letting him out now-yes, I’ve got another dad interview for you. We needed a little testosterone around here. 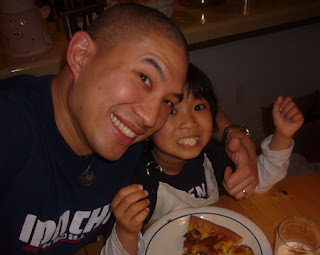 Take it away, Jim…

I’m a first-time dad. Well, that was 7 years ago, I think I’m past the statute of limitations to be able to use “first-time” as an excuse to justify how I don’t always know what I’m doing. My blog is simply a journal of the crazy stuff that happens along my journey through parenthood. This is the stuff you’d normally forget a few months after it happens unless you wrote it down somewhere. Or at least I would, since my short term memory isn’t what it used to be.

When did you start blogging?

I started in the summer of 07. My job back then involved a 4-hour commute on the train every day. I really don’t like to read and I have a laptop, so I figured I’d write instead. I had never read a single blog before the day I decided to start blogging.

Do you make money from your blog?
Nope. I’m not against it though. I just haven’t found anything worth my while. I work in internet marketing so I know that making any decent money off my blog is close to impossible, so I save myself the effort and focus my time on coming up with amusing posts instead.

How frequently do you post?
Nowadays? Haha like once every two weeks if you’re lucky. My life is just too hectic to expect much more. It used to be twice a week when I started out. Hey, at least I can be proud of the fact that I live up to the title of my blog.

Do you have a favorite blogger(s) that you just can’t live without reading?
I love to read stuff that makes me laugh. That said, http://www.whiskeyinmysippycup.com/ and http://momo-fali.blogspot.com/ are must-visits. There are about 5 more that I make a point to visit regularly for different reasons, but if you want the funnies, look no further.

Have your readers influenced you in any way?
They haven’t influenced me content-wise; however they have kept me motivated and inspired. There is no better feeling in the world than knowing that if you put something out there, a whole bunch of people will nod their heads in agreement or laugh with you (or at you, but it’s all in good fun). Without my readers, I don’t think I’d be half as motivated to do what I do. Feedback is very important to me. So is validation. My readers give me both. I have made some really close friends through blogging, and have been fortunate to have met several in person. And they are just as cool as they are on the internet. Who would’ve thought?

Has blogging changed your life in any way?
It has taken over every aspect of my life. It’s an addiction. Let’s just leave it at that.

What do you do when you get writer’s block?
I walk away. I love blogging because in the end I’m the boss of my blog. If I’m too busy to post, so be it. If I’d rather hang out with friends and family, so be it. Or I drink. It is amazing how a couple beers or some alone time with a nice bottle of Scotch can open up the creative pathways.

Any other advice you might have for newbie bloggers?
Yes. DON’T TRY SO HARD. Just do it. Readers will come. Friends will be made. There is no short cut to a successful blog (I define success as having a regular readership). Just write for yourself and participate in the “community” by visiting other blogs you like and leaving comments that matter (i.e. a “LOL that was great!” comment is crap). People will see you around and do the same. And the folks who can identify with the stuff you put out there will become your readers and stalkers. Also, join Twitter.

Become a victim-er, I mean a featured blogger! Comment on here and include your URL and I’ll sneak on over to check out your blog!

The room is spinning. The room is spinning. What the heck am I talking about? Last night before I went to bed, I started to get very dizzy. The room was a spinning and a spinning and totally freaking me out. I decided to lay down to see if it would help but it only made it worse. I finally got my head calmed down enough to fall asleep. When I woke up, I thought all was well until I sat up and well, I felt like I just ate a bad mushroom. I stumbled out of bed and told the hubby about it all the while, I’m freaking out. He said that it was probably nothing-hmm, last time I checked, dizzy spells generally happen for a reason-doesn’t just happen like passing gas. Sorry, couldn’t resist.

So, Jessica came over to help me and of course, the first thing out of her mouth was, “YOU’RE PREGNANT!”

I don’t think so. No thank you. PLEEEEASE, PEOPLE.

So, I was off to search on the Internet for the reasons why a person gets dizzy. I wasn’t sure if I had any other “true” symptoms because my chest did hurt and I felt nauseous but I think that was because I was anxious from freaking out. Yes, those are signs for a heart attack for women. I’m still alive, so hopefully that wasn’t it. I did find about a hundred reasons for dizzy spells. Thanks, Google, for freaking me out more.

So, after spending most of the day almost running into walls, my mom called and told me that she thought it probably was Vertigo. The movie? No, the sickness. Her other advice was to go to the doctor because stuff like that happens for a reason. Hmm, where did I hear that before?

I haven’t left yet to go get checked out. I think I will take a shower first and find someone to give me some coaxing to actually go. I hate going to the doctor, you see.

But, one thing I couldn’t resist today was to take my daily picture of my little baby boy. Yep. he’s Nana’s favorite.

Did you come by yesterday and wonder what happened to my usual Words with a Blogger Wednesday? Well, my featured blogger got delayed at the last minute and we missed the deadline. I promise that next week there will definitely be a featured blogger interview. Cross my heart and hope to die. Stick a needle in my eye. I really would like to skip the needle in my eye part. Maybe the hope to die too. thank you.

Maybe you were wondering what I’ve been up to? Just working on about four zillion wedding photos. Thank you for all the nice compliments on the two that I posted. Oh BTW, I received an email from a couple that are friends of that couple and wanted to know if I was available to do their wedding next year. Oh boy, here we go again. Do you have an iron skillet handy? Please knock me on the head before I say Ok.

My husband’s birthday is this Saturday. This is the time of the year I like to remind him that he is way older than me. Ok. Only by three years, but that’s enough for me to rub it in. We actually are having a get together on Sunday instead since we have a busy Saturday going on. His birthday’s are easy to do. Just get him chocolate cake and cash and he’s happy. I’ve given up trying to surprise him with a gift. It always ends the same way-I get all excited because I think I’ve gotten him something he needs and I just know it’s the right color, etc. etc. Then, he opens it, cocks an eyebrow and says, “Um, thanks?” I then sigh and hand him over a fifty. So, I’ll just save the time and disappointment and look for a money holder card.

My daughter’s much anticipated recital is next weekend, so we are getting ready for that. We received the proofs from the recital photo session that my husband had to take her to last Saturday. They turned out great-whew! I just have to choose which pose I want. THAT shouldn’t be hard. I think that’s partly why I became a photographer-so I can have ALL of the poses.

The dance people also had everyone do their makeup classes, so I told Emily that she would be going to an extra class last week. I didn’t understand why she was SO excited about going to this class. I said it was just a makeup class but she was all like, I have to wear this outfit and this hair bow. So, when the makeup class day came and I told her it was time to go, she squealed with joy and ran to the car. When we got there, she ran in and sat down and with a big smile she proudly states, “I’m ready to have my makeup put on for my MAKEUP class!” Oh boy…