If there were ever a time that I could say that I had a busy weekend, it would’ve been this weekend. So much was going on that I think my head is still spinning from it.

My whirl wind of a weekend started with getting a surprise in the mail from Hallmark. They sent four copies of our card! It was so cool and just in time for me to be able to bring an actual card when I go on

on Tuesday. They wanted to show the finalist how our cards look when sent to a store. It even included the little divider that tells you what kind of card it is. How neat! 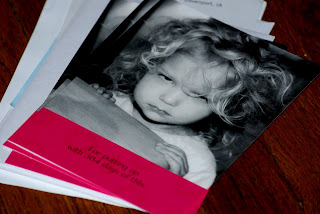 Then, I received a phone call from our local channel 4 news, asking if they can come to my house on Sunday to interview my family about the card-wow! I was all like, um, ok! After hanging up the phone, I then thought, “OMG, they are coming to my house!” I spent hours cleaning every inch of the house til it glowed because you never know where they want to go and I know they do that pretend-you-are-doing-the-dishes act and I’m not having the Quad Cities see a dirty sink!

On top of the news people coming on Sunday, it was also my wedding anniversary. We decided with all the commotion, we would celebrate it a different weekend. We did the cards thing and all and that was special to me because my hubby isn’t one to give cards. So when he does, it’s very special. I did my usual go to the mall during the day, but I stopped at the mall’s Hallmark store and asked them if they would be interested in doing a card signing and they were very excited about it. They even gave me an idea about approaching other Hallmark stores and asking if they would put some cards on the counter, stating that the finalist was a local resident.

My stomach was filled with butterflies all day, awaiting the interview. I pictured everything that could go wrong from spit flying from my mouth and hitting the reporter in the face to my daughter telling the viewers that she can spell poop. It turned out to be pretty fun. They first interviewed me and then Emily and asked if anyone else wanted to say anything and of course they said no. I didn’t have to do the dishes for a shot, but we did have to pretend to look at a photo album. They took a shot of my computer monitor and I noticed a dust bunny on top of it and wanted to leap in front of the camera and wipe it off. Luckily, it didn’t get in the shot otherwise I probably would’ve got an email from my mom about it.

They ended up cutting alot out and it turned out great except I wished that they would’ve used the whole family in at least one shot instead of just Emily and me. It was on the 10 o’clock news-I know, who with kids is up at that time? Maybe they will show it again, I don’t know. I have it recorded and if I can figure out a way to get it on the computer, I will post it. In the mean time, here are some pictures. Sorry, they aren’t the greatest! 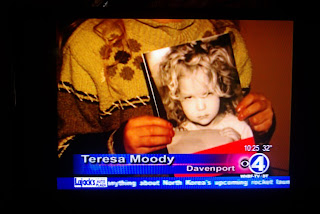 Glad we cleaned her nails. 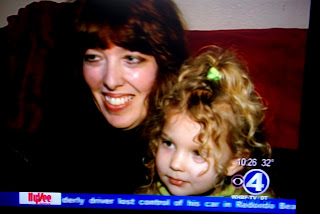 See the stickers on our door?

The weekend ended with it being the last day for the Fan Favorite Contest and I’m nervous to see who won. If I didn’t I will be sad, but I will try that much harder to win the grand prize- this starts on April 6

as I may have mentioned one or two hundred times before.

Here is the radio interview I did the other day-I know, I sound like a dork.

While you listen to the interview, you have to picture me hiding in the bedroom with my back against the door, so my four year old doesn’t come running in, yelling at me that she got a poopy stain on her new Mermaid underwear and she’s going to die right then and there if I don’t get it off.