I will resume my Words with a Blogger next Wednesday but today I wanted to reflect on the past year. My thoughts bring me to what a big year it was and the things that happened to me.
My first and foremost has been becoming a grandma this year to a beautiful-yes, Jess, I said BEAUTIFUL baby boy. It was a journey that at first when I received the news, I admit that I wasn’t happy and disappointed but I grew to realize that things happen for a reason and I wouldn’t change having that baby around for anything in the world.
This also lead to my oldest having to grow up quickly which she did a good job of it and now even has her own place. Hence me having to deal with my first child leaving the nest. Something I’m still trying to get used to.
This year marks my middle child’s last year before officially turning into a teen and I’ve made emends with it-I think.
My youngest had her first visit with the dentist and unfortunately it was not a good one and I’m sure she will need lots of therapy later in life and I’M SURE THEY WILL BLAME ME. She discovered dance class, auditioned for a movie and her face will be featured on a well known product around Mother’s Day.
It also was a year that I discovered blogging, thanks to a broadcast on the afternoon news about Mommy Bloggers. It opened up a whole new world for me as a writer and to find many wonderful people in blogging land. It even led me to an old friend and inspired her to start her own blog that I love to read and she keeps me blogging because she tells me I’m so funny.
I’ve also been able to reflect on what’s important in life with all the happenings of the United States and being thankful that we have not been hit firsthand though a close relative has.
I look forward to the new year and all that it will bring. My faith is not in one man’s hand but in the people and I believe that together, we will get back on our feet.
Ok, that’s enough of the mushy stuff- I hope you have a great new year and tonight I will make a toast to everyone in blogger Internet land (cause I get to drink now!! Woo hoo!) and please have a safe one if you do go out and party!!!
HAPPY NEW YEAR’S EVE!!!

Thank you for all your encouragement and luckily, my tooth decided to start hurting enough for me to make the call. (didn’t help much either that my husband kept shaking his head and rolling his eyes at me) I got that sucker fixed and no pain in my mouth felt like heaven. They had to give me a ton of shots because my nerves are pretty sensitive and let me tell you, if you tell them that you are afraid of them, they give you the special treatment. I even got a blanket put on me in case I was too cold. Yeah, I’m sure they were making bets behind my back to see if I cried or sucked my thumb but I’ll still take it.

I felt in such a good mood after and it was apparent to me that I’ve been a total bitch to everyone because of the pain, so I made sure I was super nice to everyone and I should thank them for not going off on me the last couple of days. They were probably nice because it was Christmas and all.

My mouth was numb until about nine o’clock last night and then it felt like someone clocked me in the jaw. Not as bad as the tooth pain but enough to sleep with an ice pack all night-but I got to sleep at least.

So, now I will have the mental energy to get back to my duties which includes catching up on commenting on my buddies’ blogs and back to writing my book. Also, just in time to get ready for all my resolutions because I definitely couldn’t do any of them if I still had that toothache that made me want to run little old ladies off the road if they were driving too slow. Thank you Mr. Dentist Dude!

Last night was the first night that my tooth allowed me to actually sleep a full night and this morning it seems to be feeling fine too. Just my luck since today is the day I have to make the call to see the dentist. I’m a big chicken (like my youngest) about going to the dentist to have work done and I was counting on the excruciating pain to convince me to make the call. So now, I’ve been pacing the floor for the past hour with the phone in one hand and the dentist’s number in the other. I even tried to get my four year old to make the call but all she said was, “Mom, I’m four. I’m just a kid.” So, the task will be in my hands to do it and hopefully my post tomorrow will not consist of me telling you that I’m still sitting here with the phone in my hand, trying to force myself to call.

I guess my motivation could be that if I get it done today, than I won’t be on any meds on New Year’s Eve so I can drink the champagne that’s been chilling in my fridge for the past week, whispering sweet nothings into my ear every time I open the fridge door. It’s basically the only time I drink during the year and I really hate to miss it. I know, wait all year to drink away your frustrations? Better get a second bottle.

We also found out that we have a little house guest in our basement that I didn’t know until I picked up a bag of old clothes and the furry little monster with a little tail ran under the couch. So, now I get to replace my “painful tooth” sleepless nights with OH MY GOD. WHAT IF THAT MOUSE CRAWLS ON MY FACE WHILE I’M SLEEPING? sleepless nights.

I hope that Christmas was good to you and that you didn’t drink too much and go off on a relative or two. Santa was good to us and I even landed one of those little netbooks- a pink one to be exact. It’s very cute and portable and I’m using it right now. Thanks, Hubby. The last couple of days were spent eating yummy food and seeing relatives that I don’t get to see very much. All was good except I’ve been nursing a toothache that seems to be kicking my butt. I even called the dentist to get some stronger pain meds which seem to not be working because I still hurt so I’ll be calling him again today to and tell him to prescribe what you would give an elephant which should dull the pain a bit until I can get in on Monday.

My kids survived this Christmas too and they already want to go to the stores to spend their gift cards. I told them they would have to wait until next week after I get my tooth fixed because otherwise I might go postal on the first shopper that bumped into me at the crowded malls.

We are celebrating our Christmas with one of our relatives tonight and hopefully the weather doesn’t keep us from going because the mental beating they will instill upon us will make my horrendous toothache seem like a tickle on the cheek.

Holidays can be so fun. 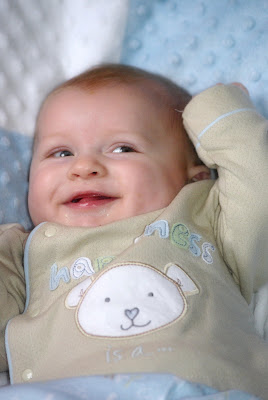 Upon taking 4 month old photos, I could not get the little guy to look towards the camera.

He was too busy flirting with his mommy to get her to pick him up.