Eating a balanced diet is not synonymous with restricting yourself from eating any delicious food. Eating healthy also does not mean saying Good bye to your favorite flavors. Let’s forget our prejudices and put aside the received ideas to return for a moment to some golden rules of a healthy and delicious diet. Our food must provide us with the necessary nutrients to be healthy and feel good.

It really doesn’t have to feel like a drag to eat healthy and balance diet. You don’t have to radically change your lifestyle to eat better. Let’s talk about how to make it easier (and yummier) today.

As I changed the way that I eat to lose weight and maintain better overall nutrition, my day-to-day choices began to look much different than they had in the past. It’s not that I never allow myself to have super rich, cheesy, decadent things: but they’re more the exception than the rule. When I do, I enjoy the hell out of them and then get back to the regular scheduled programming.

But I’ve also found myself doing things that I never used to do – making completely painless tweaks to my meals that don’t diminish them at all. In fact, I think many of the changes make for even tastier dishes. Here are 10 biggies to try:

#1. Lighten up on cooking oil.

Even though fat isn’t the enemy, using a lot of it to cook our meals can pack on a bunch of extra calories. So it’s wise to scale back.

I’ve begun using nonstick sprays quite a bit more the last few years. Don’t go crazy spraying your pan – unlike what the label tells you, nonstick sprays aren’t calorie free. Who actually sprays for a quarter of a second? But it’s still a viable tool. Either with a nonstick spray or with a thin veneer of your favorite oil, scale back on how much added fat you use for sauteeing.

I see so many recipes that use a few tablespoons of oil to just help veggies not stick to the pan. I’d rather use that oil in something that I can actually enjoy. A nonstick pan with a little spray can easily shave off significant numbers of calories without us missing any flavor. My caveat to this is that sometimes a sauce actually needs a little fat in it to round out the taste of the dish: I’d rather save that for a small amount of butter added to the end rather than making my food not stick.

#2. Greek yogurt instead of mayo or sour cream.

Yogurt in tuna salad, on a potato, in your chili.  Yogurt is not only tasty, it’s high in protein, low in calories, and serves as a perfect stand in for heavier condiments as well as making your morning breakfast bowl more wonderful.  Eating one yogurt a day would be beneficial in many ways.

Yogurt provides a good dose of tryptophan, an amino acid that is also the precursor of the essential serotonin, which regulates mood. Not manufactured by the body, this tryptophan must be provided by the diet, it also supports physical endurance, sleep, relieves anxiety and depression.

#3. Cereal vs. granola for sprinkling.

This one pains me, because I love the flavor and texture of granola. And it might surprise you to see this one listed. After all, granola has a rep for being wholesome and virtuous. Sure, it has some whole grains and nuts. But it’s also crazy high in calories and has bunch of extra sugar and fat that I’d rather not spend on such a tiny amount of food. Granola is usually a topper for my yogurt. I began switching it out for a little cereal, because the main reason I like it in yogurt is for the crunch.

When I do have it, it’s just a few tablespoons – definitely not an entire bowl. I’ve found a few exceptions – Mamma Chia granola is relatively low on calories and high in nutritional value. I found some at Target recently. It’s definitely not as sweet or decadent as most granola I’ve had, but it’s satisfying.

A good rule to follow when putting together a dinner plate is to cover half of it with veggies, include a portion of lean protein, a small portion of starchy carbs, and a wee bit of fat.

That’s a great rule: except that becomes tricky to do with many recipes, especially soups, stews, and casseroles. An easy way to make your meal look more like what I described is to just double the amount of veggies in the recipe and halve the amount of starch (especially if the recipe includes a lot of it).

This makes for a meal where you still get to enjoy your family’s favorite “epic pasta meal” but can usually make it a little less calorie dense. You’ll squeeze in more nutrient-packed vegetables this way too. Win/win. 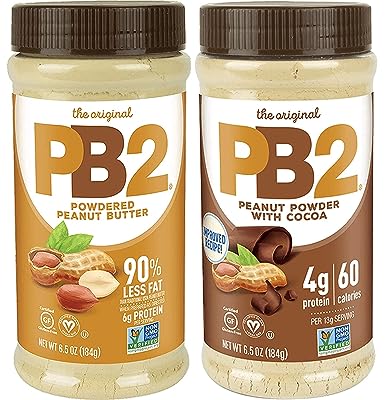 PB2 was a slowly-burning love affair for me. This is the most popular brand of what’s essentially dehydrated peanut butter. At first I just added it to smoothies. Then to Greek yogurt. Those were my gateways into full PB2 obsession. Now I rehydrate it with a little water and add it to oatmeal, pancakes, or just eat it like peanut butter: with an apple, celery, or on a spoon. It’s so much lower in calories than peanut butter and it’s shockingly good.

I recommends cooking your own meals more often. That way, you know exactly what’s on your plate. And if you’re not a fan of cooking, don’t worry. One or two home-cooked meals a week is a great start. If you eat out five times a week, try cooking a few dishes next week. You’ll gradually reduce the number of takeout meals you consume.”

#7. Lemon and a drizzle of heart-healthy extra virgin olive oil vs. packaged dressing.

I end up using less dressing this way and my salads actually taste fresher. Try it! Sherry and balsamic vinegars are intensely flavored and make another good sub for lemon. I end up needing very little additional oil. Just enough to help absorb those nutrients in the greens.

#8. Fresh fruit instead of dried in pretty much everything.

Ugh, I love raisins and dried cherries. But I can get so much fuller from using fresh fruit on way, way fewer calories. Dried fruit is calorically dense, often contains added sugar, and makes me sad when I measure out the tiny 2 TBSP serving. I use it sparingly or as a treat. Most of the time, I’m team #freshfruit.

#9. Bulk up a casserole with plant-based protein.

Mushrooms are extremely low in calories, boost a bit of protein and minerals, and have a meaty texture that plays well as either a stand-in or addition to meat in many meals. They’re also usually easy to find at a low price.

Now that my 3 boys eat enough food to feed a small army, bulking up our casseroles with foods like beans, chickpeas, and mushrooms not only gives them a more diverse source of nutrients in their diet; it also sometimes shaves off calories and saves us money. I don’t mind going totally meatless some days – my kids prefer me adding at least some meat to the dish, so I just do half meat/half plant stuff.

Tacos are life. It’s also Tuesday, so I thought I’d wrap this up with a taco tip. Those tortillas we use to wrap up our yummy fillings can really pack on a ton of not-all-that nutritious calories. Corn torillas are flavorful, smaller, and help control portions.

Sometimes I skip them completely and just serve my filling on top of greens, which shaves off calories and helps me get more servings of veggies into my day. This is one example of a thing I don’t really miss all that much.

Do you have any swaps you use? Share them, pretty please? I’m always up for new cooking hacks. Let’s start a conversation about it. Have a great day!